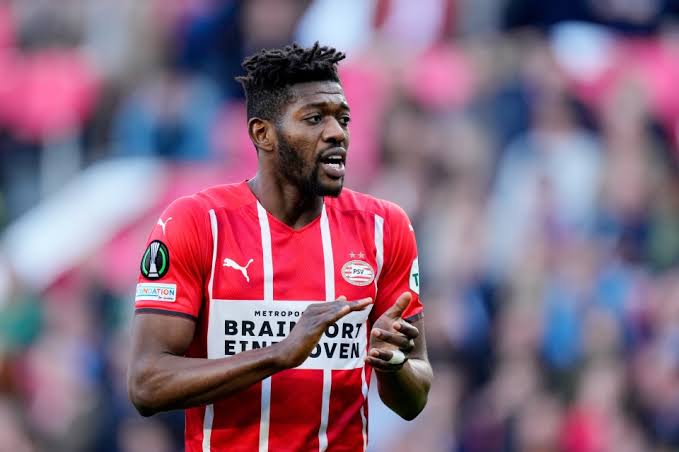 Chelsea are tracking PSV midfielder Ibrahim Sangare as an alternative to Declan Rice, according to reports.

Sangare has impressed for the Dutch side this season, especially in the Europa Conference League quarter-final games against Leicester last month.

His performances have caught the eye of several Premier League clubs including Chelsea, who are baulking at West Ham's £150million demand for Rice, according to the Mirror.

Sangare came through the ranks at Ligue 1 club Toulouse, where he impressed with his ball-winning ability before moving to PSV in 2020.

The 24-year-old has performed at a consistent level for the Dutch side despite them losing the Eredivisie title to Ajax this season and he is 'one of a number' of defensive midfielders on Thomas Tuchel's radar.

In an interview with Dutch outlet De Telegraaf earlier this month, Sangare revealed he dreams of playing in the Premier League.

He said as cited by Sports Central: 'I am a PSV player, and I am concentrating on the three games we have left this season. 'I don't have my head in other things. After that, I'll go on holiday, and I'll have time to talk about possible next projects. But until then I don't want to worry about that. 'Playing in the Premier League is not only a dream of mine but a dream of every footballer. That is the biggest and most important league in the world.'

Chelsea are set for an overhaul this summer following a disappointing campaign, which has seen them sit 19 points behind Premier League leaders Manchester City.

The Blues were also defeated in the Carabao Cup final by Liverpool before getting dumped out of the Champions League by Real Madrid.

The likes of Jorginho and N'Golo Kante are out of contract next summer and reports have suggested one or even both could be moved on.

West Ham's Rice has been a top target for Chelsea but the Hammers' £150m asking price looks to be putting off potential suitors.

Despite their overwhelming season, Tuchel's side still stand a chance of winning a trophy when they take on Liverpool in the FA Cup final on Saturday.