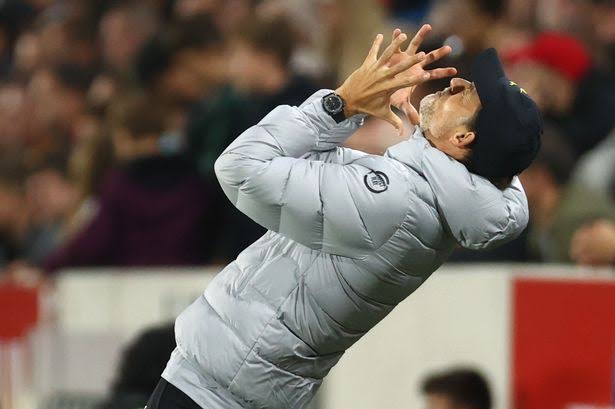 Chelsea are battling dressing-room turmoil just as new American owners close in on a £4.25billion takeover.

Boss Thomas Tuchel hauled in his underperforming stars for extra training and a team meeting on their day off on Sunday — 24 hours after they blew a two-goal lead against Wolves.

It follows claims the head coach had an exchange of words with left-back Marcos Alonso, who was substituted at half-time in the game.

Chelsea deny any bust-up between the pair but sources claim Alonso felt he was made a scapegoat for a poor team display.

The Spanish defender believed he was having his effort questioned and that tactics were also to blame for the struggle to secure the points.

Alonso accepts the manager’s right to take him off and wants to play in tomorrow’s game at Leeds to put the incident behind them.

Tuchel is angry that his players are unable to get themselves out of a rut which has cost ten points in the last five matches — putting a third-place finish in the league at risk.

Chelsea are also desperate to beat Liverpool in Saturday’s FA Cup final and win a major domestic trophy this season and need to be on top form.

Sources at Stamford Bridge say the players were unhappy at being called in as they have played 59 games in a gruelling campaign.

But Tuchel is determined to turn things around, even if it means getting heavy-handed with his squad in a forthright address at the Blues’ Surrey HQ.

The German is demanding the players show more character and refuses to let fatigue or the imminent sale to US businessman Todd Boehly and his consortium be used as an excuse for poor form.

Squad members who played in the Wolves game did gym work, while those who were on the bench trained.

But the meeting was seen as the key element of the day.

Some stars also fear that losing leaders like Antonio Rudiger and Cesar Azpilicueta next month will weaken their bid for the title next season.