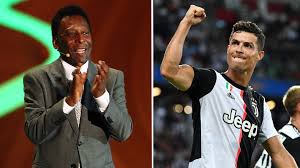 News has it that following Juventus’ ninth consecutive Serie A title winning, which saw Cristiano Ronaldo playing a huge part in motivating the Old Lady, however, Brazilian legend Pele has called the Portuguese the best player in the world in the past and is still a big fan of his achievements.

Pelé recognized the efforts of "modern athlete" Ronaldo. The Juventus superstar has added a second Serie A title to his enviable honor of collection.

The Bianconeri have won a ninth consecutive crown in the Italian top league.

Ronaldo's presence in Turin has helped to consolidate the dominance. The five-time Ballon d'Or winner has showed no signs of slowing down at the age of 35.

He continues to set standards for his colleagues, which has guarantee a place among the greatest.

Pelé also occupies that talent class, and the Brazilian legend remains a big fan of a modern superstar.

He is happy that Ronaldo's remarkable professionalism and dedication to his craft are amply rewarded and that significant honours are regularly won.

The legendry icon from the past is also happy for fellow compatriots Douglas Costa, Danilo and Alex Sandro, who won another medal alongside their famous Portuguese teammate.

Pelé said in a post on his official Instagram account: “@Cristiano is the modern athlete who shows everyone that success always applies to those who are engaged and love what they do. “Also, I would like to congratulate my fellow Brazilians @douglascosta, @alxsndro12 and @daniluiz2. Great work winning the @seriea title, @juventus.”

Pelé has consistently expressed his admiration for Ronaldo over the years. The three-time World Cup winner even placed the Juventus superstar to the top of the world game.

For him, Portuguese power trumps Argentine flair, with Barcelona icon Lionel Messi acting in the shadow of an eternal rival.

As cited by Sports Central, Pele said: "Today the best player in the world is Cristiano Ronaldo. "I think he's the best, because he's more consistent, but you can't forget about Messi, of course, but he's not a striker."

After helping Juventus win another Serie A title, Ronaldo will now look forward to the pursuit of a sixth Champions League crown.

Maurizio Sarri's side have two more league matches to play this season, but the focus is already on the return leg of a Champions League round of 16 meeting against Lyon on August 7, which the Bianconeri are currently chasing 1 -0.