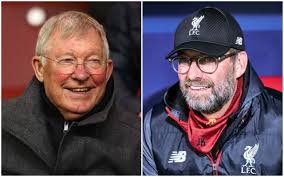 News as reported by Sports Central has it that former Manchester United manager Sir Alex Ferguson knew from the onset according to Jamie Carragher, Jürgen Klopp would be the man who would end Liverpool's 30-year wait for an English title from the start.

The German tactician landed at Merseyside in 2015 after being impressed by his high-risk-high-reward pressing game at Borussia Dortmund, reaching the Champions League final and winning the Bundesliga title twice.

However, after sixth place under Brendan Rodgers in 2014-15, Klopp came into a team that needed urgent hauling before a low eight in his first season introduced little of the monumental success he has achieved.

Speaking to the Telegraph as reported by Sports Central, Carragher said: 'Outside Anfield, there was only one high-profile figure in the game who tried to convince me Klopp could bring the title to Anfield. 'I should have listened to Sir Alex Ferguson. I will never forget meeting Sir Alex when I played in Michael Carrick's testimonial in June, 2017. "You've got yourself a manager, there," Fergie told me. 'It was the look he gave me which was most revealing, as he explained how impressed he had been with Klopp during Champions League coaching seminars. 'Klopp attended while Borussia Dortmund coach to hear from the most esteemed football minds. He felt, and exhibited, no inferiority complex, and Ferguson intuitively knew he was perfect for Liverpool.'

With Ferguson’s 13 Manchester titles, the Old Trafford team dominated their bitter rivals season after season, but the Scot now had to watch Liverpool swap roles from a distance.

The Old Trafford outfit are still a long way from challenging the title under Ole Gunnar Solskjaer this season and as they are 37 points below the all-conquering Reds.