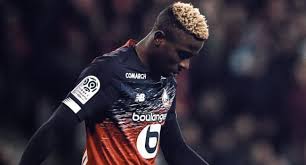 News emanating from France has it that Super Eagles striker Victor Osimhen had received compassionate leave by his French club Lille to attend his father's funeral and is expected to return to France this week, but according to Sports Central, the forward is believed to be stranded in Nigeria because borders are closed to curb the spread of coronavirus.

however, in a conversation with journalists at Friday's press conference, Lille manager Christophe Galtier explained why his top scorer last season was not in training.

The 53-year-old said: "No, he did not return from Nigeria. He was due to arrive today. But he is blocked by the health crisis because the borders are closed."


Sport Central reveal that Lille are ready to send a private jet to bring back Osimhen, but the player and his entourage have not yet received the green light from the Nigerian authorities.

Meanwhile, Lille have set up friendly matches in Mouscron and Bruges as part of their preparations for the new season and are in talks with Kortrijk and Anderlecht for two additional meetings on July 31 and August 1, respectively.