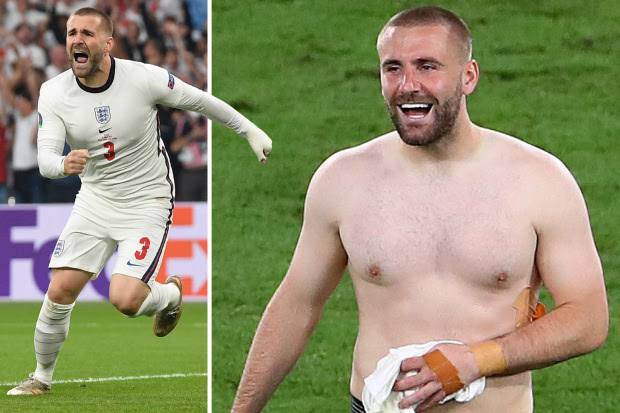 Luke Shaw To Miss Start Of Season Due To Broken Ribs

Manchester United defender Luke Shaw may miss the start of the new season after it was revealed he sustained broken ribs in England's Round of 16 Euro 2020 win over Germany.

Manchester United defender Luke Shaw played with broken ribs through the knockout stages of Euro 2020, it has been revealed.

The left-back was one of the stars of the tournament as he provide three assists in six appearances and scored the goal in the final against Italy.

Shaw suffered the injury in the Round of 16 victory over Germany but he played on across England’s final three matches of the tournament as he attempted to help them to glory.

It is now unclear if Shaw will make a full recovery for United ahead of their Premier League campaign getting underway next month and he is likely to be assessed by the club’s medical team.

A report in The Telegraph outlines how the club preferred for Shaw to end his participation in the Euros once it was revealed to them that he had suffered the injury.

Shaw preferred to play through the pain barrier as he helped Gareth Southgate’s side to victories over Ukraine in the quarter finals and Denmark in the last four, before ultimately falling just short against Italy in the final.

That final was nine days ago but all those who were involved are still on holidays and are not expected to return to their respective clubs ahead of pre-season until later this month.

Shaw is currently on holiday in Greece and any definitive decision on how to treat his injury is not likely to arrive until his return to United’s Carrington training facilities where he will undergo a fitness test.

The left-back has become a key player for club and country over the past 12 months, having found the best form of his career in both an attacking and defensive sense.

He became England’s first player to score in a major final in 55 years as his finish off-the-post opened the scoring after two minutes in the showpiece against Italy at Wembley.

It followed on from a superb club season for United, where he developed into a set-piece expert with his delivery in the final third greatly improved.

That allowed him to usurp Chelsea ’s Ben Chilwell at international level - it is unlikely Shaw would have been involved for England at all had the tournament taken place in 2020 as scheduled.

United also have Alex Telles and Brandon Williams who could play in the left-back position but Shaw has indisputably made the position his own in recent times.

It is not ideal news for Ole Gunnar Solskjaer’s side who also have to deal with an injury to Marcus Rashford, who requires shoulder surgery and is likely to be out of action until October.

United got their pre-season off to a winning start by beating Derby 2-1 on Sunday, and their Premier League campaign will get underway at home to Leeds United on 14 August.