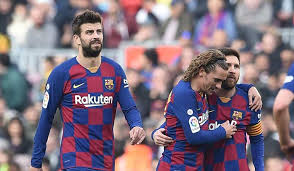 This week’s Barcelona news is increasingly focused on the upcoming El Clasico clash against Real Madrid.

In what is sure to be a significant game in the title race in La Liga, there will be many questions posed over how both sides will line-up.

A report in Marca highlights how one Blaugrana star is likely to be dropped for the encounter.

It highlights how Frenkie De Jong  commented on his desire to play a midfield role, which would see him partner Pedri and Sergio Busquets in a midfield trio as the Catalan giants look to match Madrid’s midfield trio.

Gerard Pique and Ronald Araujo would return in the centre of defence alongside Clement Lenglet, with Jordi Alba and Sergino Dest in the wide wing-back roles.

With Lionel Messi indispensable and Ousmane Dembele in fine form and with his speed necessary for the attacks, that would mean Antoine Griezmann would be the fall player.

The Frenchman has found the net just twice in his last 13 appearances for the club and has struggled for form in front of goal this season but may be the player to miss out in what is closer to a 3-5-2 formation.