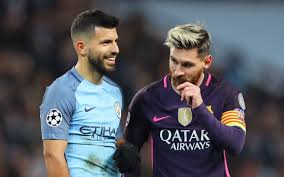 The 32-year-old Argentine is out of contract this summer, which means he can talk to European clubs about a free transfer.

And that has alerted Barca, who are keen to bring the ex-Atletico Madrid forward back to Spain.

Aguero is still waiting for a new deal offer from City, where he has been for nine years.

He will miss Wednesday’s home clash with Brighton and Sunday’s tie with Crystal Palace because he is self-isolating after being in close contact with someone infected with Covid.

As well as interest from the Nou Camp, Aguero, City’s all-time leading scorer is also wanted by Mauricio Pochettino, the new boss of Paris Saint-Germain.

City boss Pep Guardiola said as cited by Sports Central: “He’s quarantined. Isolated. The rules, I think, say that after nine or 10 days he will be back.

Aguero has won four Premier League titles, five EFL Cups and one FA Cup during a trophy-filled spell at the Etihad.

Guardiola last week revealed that the hitman remains 'optimistic and positive' about getting back to his best this season.

And asked yesterday if the Argentine can rediscover his top form, he added: “Hopefully he will, that’s what I wish. "He’s a guy who needs training but now has better conditions in his knee. “In the last 10 or 15 days before isolation, he was perfect.

Meanwhile, City’s owner CFG has set up a partnership with Bolivian outfit Club Bolivar the 11th club in the stable.