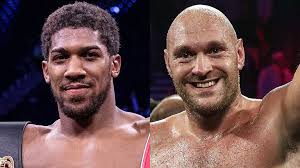 Tyson Fury promoter Bob Arum vs. Anthony Joshua said, "I'm 95% confident the fight is going to happen, and I'm 100% sure my guy will win through KO."  An agreement could be reached within 14 days.

US Tyson Fury promoter Bob Arum is 95% convinced about the of his client and Anthony Joshua and also hopes to sign a deal within two weeks.

WBC champion Fury has been negotiating with Joshua, the WBA, IBF and WBO belt holder, as the British heavyweight rivals edge closer to finalising a massive undisputed world title fight this year.

Top Rank boss Arum, who has guided Fury's career in America, is hopeful that the Joshua fight will soon be confirmed, although a final decision on a venue could be delayed, with a number of locations still being considered.

Arum told Sky Sports News as cited by Sports Central: "I don't want to make a deadline, but I just can report that everything so far has been going splendidly, and we hope to have a signed document within the next couple of weeks. "That might not provide for a site, because again, we can have a document that the fighters would have signed, and everything, and then have a mutual agreement clause of the site. "We're all on the same page, as far as I can see. "I'm 95 per cent confident the fight happens, and I'm 100 per cent confident that my guy wins, and wins by knockout.

Joshua's promoter Eddie Hearn has been discussing a deal with Arum, including a list of countries that have expressed an interest in staging the blockbuster battle.

Hearn told Sky Sports: "I don't want to say too much, other than we're going well. "We're now papering the fight, in terms of the contracts, a period of the fight, and looking out now in the next stages to go to the different various sites that have made offers and discuss the fight and the date with them. "All I want to tell you really is we're on track and I don't see anything derailing it. "We're talking to Saudi Arabia, we're talking to Qatar, we're talking to Dubai, we're talking to Singapore, we're talking to China, we're talking to America. "We all know everybody would like this fight in the UK. Can we hand on heart say that in May, we can have 100,000 people in Wembley? I think very unlikely.

Arum also revealed that Hearn is keen for his Matchroom fighters to face their Top Rank rivals on the same bill.

Arum said: "We talked about the undercard and Eddie made a really good suggestion - that we have Matchroom fighters against fighters from our side. "That would be pretty good. It would be interesting.

Krassyuk told Sky Sports: "There were talks about an interim title or the AJ vs Fury winner relinquishing the WBO title the next day [after they fight]. "But as for today Usyk is the WBO mandatory and never gave his consent for the [Joshua vs Fury] bout to happen without him.

But Arum has said: "He is the mandatory for the WBO, so we will ask the WBO to allow this fight to happen with Fury and Joshua, and that would hold off Usyk. "If we were not able to accomplish that, well maybe before we try to accomplish that, we would reach some kind of solution with Usyk where he fights somebody else, maybe on the same card. We'll find a solution. "I'm optimistic we will find a solution. Now if we don't, the unfortunate thing would be, that we do it without the WBO title. Be that as it may, but I think it would be nice for boxing to do this for the undisputed title. 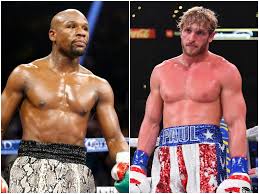 Mayweather's Expected Fight With Logan Paul Set To Be Rescheduled 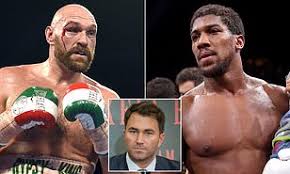