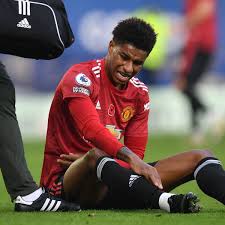 The forward was dropped during international break due to injury, but his manager says there is a chance he could play against Baggies this weekend.

Manchester United are hopeful that Marcus Rashford will be back on the pitch against West Brom this weekend despite the lack of international breaks due to a shoulder injury.

The forward picked up a knock in the win against Everton at Goodison Park two weeks ago which ruled him out of England’s three games, but he has since returned to training ahead of United’s Premier League clash at Old Trafford on Saturday.

Solskjaer said in his pre-match press conference as cited by Sports Central: “Marcus joined in for the first time today, hopefully there’s no reaction, I’m not sure.

While there’s hope the England international will be fit, Solskjaer confirmed there are a number of doubts, with Victor Lindelof still struggling with a back problem and Mason Greenwood having missed eight days of training with an illness. Alex Telles has been restricted to just one appearance since signing from Porto, but is also expected to be in contention after returning to training following a recent positive Covid-19 test.

Solskjaer said: “The short version is: Luke Shaw, Jesse Lingard and Phil Jones are the only ones who didn't join in part of the training today, some are at different stages. “Some are in recovery after the internationals and travels, some are working back after illness and fitness and we'll make a decision tonight. But most of them have joined in today and some joined in yesterday, so it’s looking good. “Eric Bailly, that was his first day today so no, him and Marcos Rojo just joined training today for the first time for a month, not ready. Victor, we'll have to check tomorrow because his back is not great.

The amount of injuries across the league has been cause for concern for all managers, with the hectic schedule thought to be having a direct impact on players picking up knocks.

As a league, it voted against allowing five substitutes, something Solskjaer has criticised, and the Norwegian again explained why he would like to see the rule reconsidered after changes were brought in by the Football League.

Solskjaer explained: “We had a very good managers' meeting the other day where we discussed it. “Player welfare has to be at forefront of our heads this season, mental health and physical health.  “Life has changed for all of us and 2020 is a year no one could have foreseen and no one knows the after-effects of it. But the football authorities can help and use common sense with fixture scheduling as well and we as managers need to look after players. “When they've played too many games, we need to try and get the rest when possible, it's a complex situation for many of us.

He added: “I think, and I know, loads of injuries happen towards end of games and if you have a chance in the last 15 or 20 minutes to take players off instead of only making three substitutions you might save some injuries. “Fatigue is the main cause, you might be late in a tackle and you might not hurt yourself, but you might hurt someone else, so it’s a bigger discussion.