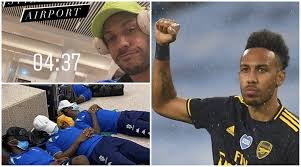 Earlier this week, the 31-year-old shared photos of himself and his teammates lying on the ground at an airport in Banjul.

The Panthers arrived in Banjul for their 2022 Africa Cup of Nations qualifying fixture against the Gambia late on Sunday night but they were delayed at the airport by immigration officials.

The delay forced Gabon players and coaching crew to sleep on the floor until 5:00 on Monday, a situation Aubameyang likened to being a hostage.

The unpleasant reception made Gabon coach Patrice Neveu worried about Aubameyang’s future invitation to the national team which might be blocked by Arsenal.

When asked if the claims were right, Arteta said via Football London as cited by Sports Central: “No he's not right. Obviously, it was a shock to see a full squad sleeping the way they were doing. “I always believe that everybody's trying to do their best and the Gabon national team are trying to organise things the best possible way. Sometimes unpredictable things happen and it was an experience. “I said to Auba, 'Take it as an experience. I'm sure for many months or years you haven't slept on the floor, take it from there and just make sure when you're in your bed, you know how good it is, how comfortable is it and how lucky you are' and that's it.

He added: “You cannot change it, you cannot rewind it so take it the way it is and move on. I hope that the next time it doesn't happen and that our players have the rest that they need.

Gabon lost the match in Gambia 2-1, and they dropped to the second place while their hosts claimed Group D top spot.

A few days before Monday’s trip, Aubameyang sealed the Panthers’ 2-1 victory over Tom Saintfiet’s side at Stade de Franceville.

He is back from international duty and he is in contention to feature when Arteta's men visit Leeds United for Sunday’s Premier League fixture.

The 31-year-old has scored two goals in eight league appearances for Arsenal, who are 11th in the Premier League table.