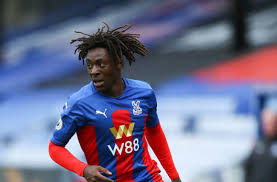 Veteran coach Roy Hodgson believes Eberechi Eze has started his career well at Crystal Palace and the winger's best years are yet to come.

The Nigeria-born England U21 international has made his way into the Eagles' starting lineup, starting against Everton and Chelsea ahead of the international break.

Brighton & Hove boss Graham Potter said at his press conference ahead of his team's visit to the English capital for the match's week five that Eze has added a new dimension to Crystal Palace.

Reacting to Potter's comments, Hodgson told reporters on Friday as cited by Sports Central: "I've got a squad of players here, and my job is to pick what I think is the best team in that squad. I'm expecting every time I pick a team that whoever I've chosen goes out there and does what I believe him capable of doing. "Eze is fortunate if you like that he's at the start of his career and it has gone very, very well for him in the beginning. "We've signed him because we think it is going to continue to go well for him, and we believe in him as a player.

Despite being an eye-catcher in his five games for Palace in all competitions, Eze faces the Seagulls on Sunday and is still chasing his first goal.