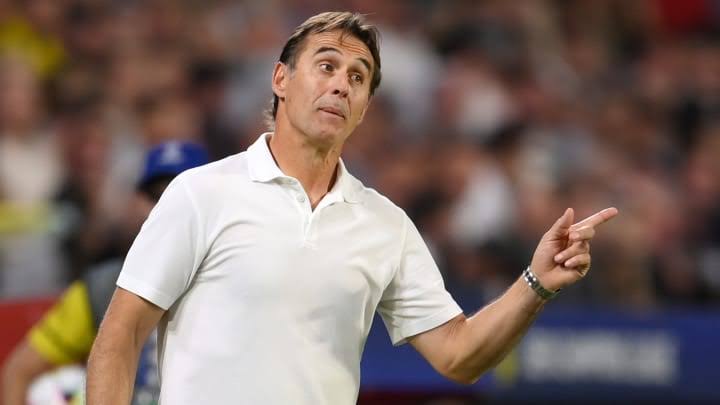 Wolves are expected to hold talks with Julen Lopetegui this weekend, following his sacking as Sevilla head coach.

Lopetegui was dismissed by the Spanish club last night following a 4-1 home defeat to Borussia Dortmund in the Champions League.

He had become Wolves' preferred candidate to replace Bruno Lage prior to this result however, and despite just one win so far this season leaving Sevilla 17th in La Liga.

Lage himself was sacked by Wolves after a 2-0 defeat at West Ham last weekend left them 18th in the Premier League.

Lopetegui, who has been replaced by former Marseille boss Jorge Sampaoli at Sevilla, is understood to be represented by Jorge Mendes - a close associate of the Wolves ownership who also represents a number of the club's players.

Lopetegui, who has been replaced by former Marseille boss Jorge Sampaoli at Sevilla, is understood to be represented by Jorge Mendes - a close associate of the Wolves ownership who also represents a number of the club's players.

He said in his post-match press conference as cited by Sports Central: "I have many mixed feelings. It's hard to describe them. "The first thing that comes to my head and my heart is gratitude towards my club, the city, the team's fans, my players - and everybody else who works for Sevilla. "We've lived through very nice things together and then there is the other sentiment of sadness for leaving a club I love, and I am sure I will get over this situation. Those are my feelings.

Wolves have scored only three league goals so far in 2022/23 - despite registering 97 shots - and sit 18th in the Premier League table.

However, the club are not in a hurry to appoint a successor to Lage, with coaches Steve Davis and James Collins set to take charge of Saturday's game at Chelsea.

Lopetegui had been in charge at Estadio Ramon Sanchez Pizjuan since June 2019, but was increasingly under pressure with Sevilla having won just once in eight league games.

He was linked with the job at Molineux back in 2016, but became manager of the Spanish national team, with whom he spent the best part of the next two years before an ill-fated 14-match spell in charge at Real Madrid.