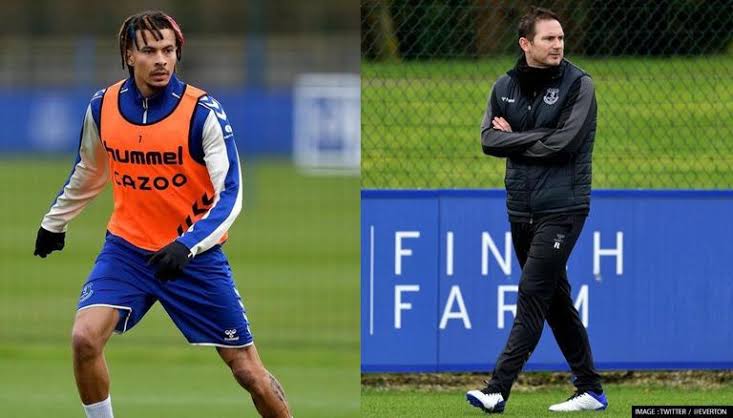 Frank Lampard is prepared to ask Dele Alli to answer Everton's striker crisis but warned him there are no shortcuts back to his peak form.

Dele arrived at Everton on Lampard's first day as manager in January this year but his performances have been underwhelming, with the exception of an outstanding 45 minutes against Crystal Palace in the penultimate game of last season.

The 26-year-old is one of many Everton players who have questions to answer this season and it is looking increasingly likely that he will start Saturday's opening clash against Chelsea up front, with Dominic Calvert-Lewin out for six weeks and Salomon Rondon suspended.

In the two years prior to the 2018 World Cup, Dele scored 27 Premier League goals for Tottenham but, since returning from Russia, he has only added another 14.

To strip that figure back even further, Dele has managed just one goal in the last two seasons. Asked how he would go about re-lighting a fire in Dele, Lampard said as cited by Sports Central: 'I think it's sometimes support and sometimes tough love. 'We will constantly support them because they are young men. If I heard those numbers (about Dele's goalscoring) and didn't know the player, and saw 20 goals, 20 goals, five goals, two goals, or whatever, I would say, 'We've got to find a solution'.

He added: 'There must be something there which can be physical, or it can be mental. So, I think it is important he has a support mechanism, and not just me, he has to support himself, and the people around him.'

Lampard is trying to bolster his squad and Everton remain in talks to re-sign PSG's Idrissa Gueye, 32, while they have matched West Ham's £33m bid for Lille's Amadou Onana, with the midfielder having expressed a preference to move to Merseyside.

Everton's priority, however, remains signing a striker. They are interested in Chelsea's Armando Broja but Lampard would not elaborate on specific targets.

Lampard said: 'Losing a player like Dominic in the week going into the first game is probably going to affect you. 'I think we are probably looking at six weeks for the injury. We will have to work around it and other players will have to step up and do the job.'