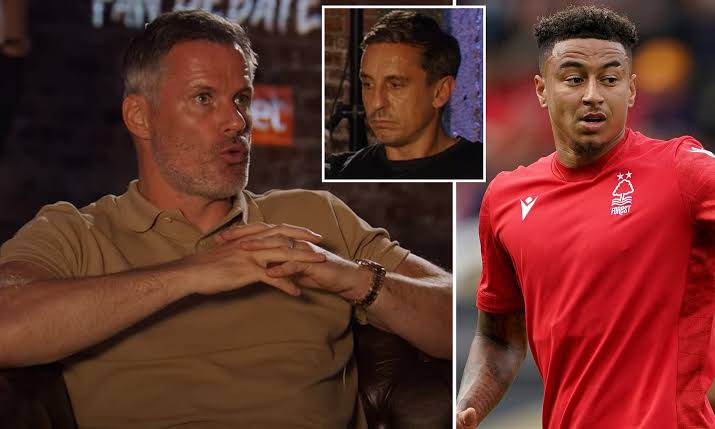 Punditry duo Jamie Carragher and Gary Neville have slammed Jesse Lingard's decision to move to Nottingham Forest - and suggest his reputation has 'taken a hit'.

The former Man United midfielder completed a move to the newly-promoted Premier League side last month after snubbing West Ham, who were also interested in his services.

Lingard has since been on the receiving end of a number of criticisms, and the punditry duo did not hold back in their suggestions that he moved to Forest 'for the money'.

Speaking in Part Two of the Overlap Live Fan Debate, Carragher said as cited by Sports Central: 'He [Jesse Lingard] went there [Nottingham Forest] for the money. I love Nottingham Forest, that they are back [in the Premier League]. 'If any footballer is picking Nottingham Forest right now, before West Ham and what they've done in the last two or three years, they've obviously gone there for a few quid. And, the fact that he's only signed for a year means that next year on a free or Bosman [ruling]. 'There's a good chance Forest could go down, but it puts Jesse Lingard in a good position if he gets eight to ten goals for them. But, if West Ham want you right now, I can't believe he never went to West Ham. It's brilliant for Nottingham Forest.'

The England international, who left Manchester United at the end of his contract, turned his back on West Ham to sign for Forest despite excelling on loan with the Hammers last season. He has penned an £80,000 per week deal basic salary with the rest to be made up in potential bonuses.

Meanwhile, Neville claimed that: 'It just felt really transactional [Lingard signing for Nottingham Forest]. 'Football fans, when it comes down to it, later in the year, if Jesse started to be linked four or five months in with where he's going to go next year – it won't end well. 'Fans don't like transactional stuff like that. They are happy to play the game. They [Nottingham Forest] could have shaped it a different way. Two years [on a contract] and if we go down, a little clause in the contract that says you can leave on a free.' 'Jesse could have been clever. Reputationally, he's taken a hit. He could have signed a two-year deal where he leaves at the end of the season – if they go down – for free.

Lingard's decision to snub West Ham for Forest means he could be in for a frosty reception from the away fans when makes his home debut on August 14.

Neville continued: 'No one needs to know about that clause and it's just smart. Why expose yourself to the fact it looks cold, ruthless and money hungry? And he's turned down West Ham. This will not be good either publicly with the media, or the fans if after six months he's starting to talk about [moving elsewhere]. 'No one ever questions his work ethic, he's always overperformed. He had pressure put on him a few years ago to go, people thought he needed to be Ronaldo or something – and he obviously isn't that type of player. 'I just think in terms of how you portray yourself and are viewed in football – you can make moves sometimes that mean you're portrayed in a way that won't help you in your future life after football. This was one of them that he might look back upon and think 'I wish I hadn't of done that'.

Forest approached Lingard with a lucrative £120,000-per-week deal to help strengthen their squad ahead of their first campaign in the Premier League since 1999.

The Hammers had also been in the transfer race to sign Lingard permanently after his successful loan spell in 2020-21. However, they were reluctant to raise their own offer, which was less than the one made by Forest.

Therefore, Forest won the transfer race to the 29-year-old - who is just one of Steve Cooper's 12 new signings preparing for the return to the top flight.