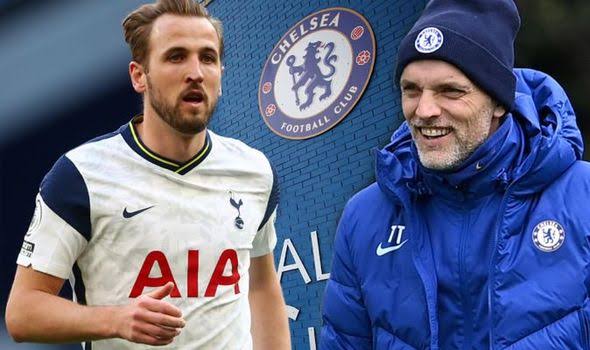 Chelsea are interested in signing Harry Kane from Tottenham, according to reports.

The Blues wanted Kane last summer when it appeared he could leave the North Londoners.

The striker is happy again at Spurs, however, and is enjoying working under Antonio Conte.

But he is yet to be offered a contract extension, with his current deal having two years remaining. Chelsea would still love to bring their rivals' talisman to Stamford Bridge.

Although according to Bild's Christian Falk, they recognise that Spurs would rather sell to Bayern Munich, if Kane was to make to it clear that he won't pen a new deal.

Football London report that Kane is settled at Tottenham and that it is just a "matter of time" until the North Londoners open contract talks.

Bayern boss Julian Nagelsmann was vocal about his admiration for Kane last week, while the German side's chief executive Oliver Kahn claimed it would be a "dream" to sign him.

Conte, 52, hit back as cited by Sports Central: "Honestly I didn't hear this. For sure I'm a coach who doesn't talk about players from other teams. I don't know why [this happened]. "The situation at Tottenham is very clear. The plan is very clear with the club. Harry is a part of the project. He is a very important part of the project and yeah only rumours.

He then continued: "At the same time I repeat I don't like to speak about players from another club. "If I want to do something I go to speak to the club, not through the media. "I think maybe it's a bit disrespectful for the other club. This is my way. This is my way to face the situation with other players."

Kane, who turns 29 on Thursday, has been on fire in pre-season - notching five goals in three matches.

On working with Conte, he recently said: "Antonio has been fantastic. I’ve learned from every manager I’ve worked under. Antonio has probably taken fitness levels to another level for me. "The mentality, being with him every day seeing the way he prepares, the way he brings his passion and brings the best out of the lads, I’ve learnt from that. "I feel like I’m learning every year anyway and getting more experience and getting better, but with someone like Antonio it’s speeding up that process even quicker.

He added: "I feel in good shape. There’s still work to do in the next month in this pre-season. I feel like I’ve still got a lot more to give and hopefully I can show that next year."

Chelsea, meanwhile, are likely to go into the season with Kai Havertz as their first choice forward after the departure of Romelu Lukaku.

Having signed winger Raheem Sterling for £47.5million from Manchester City, the Blues have switched their attention to strengthening their defence.

Kalidou Koulibaly has arrived from Napoli, while they have been working on deals for Jules Kounde and Presnel Kimpembe.